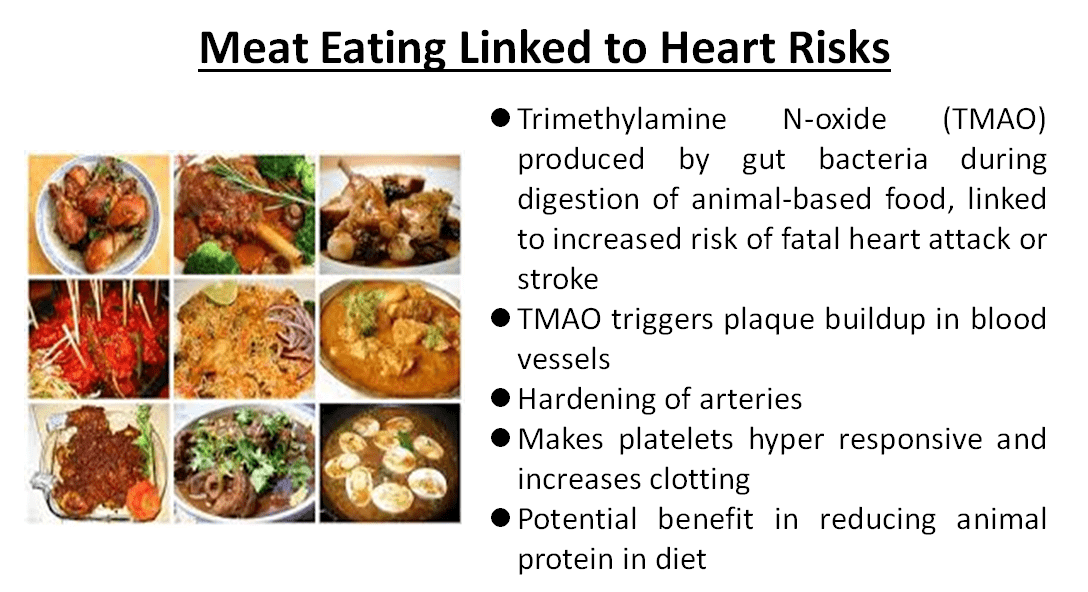 In a study published in European Heart Journal, it has been reported that Trimethylamine N-oxide (TMAO), a molecule produced by gut bacteria in the digestion of red meat, eggs, accumulates in blood plasma and is linked to increased risk of heart attack or stroke. The Researchers found that patients with high blood levels of TMAO were six times more likely to suffer a fatal heart attack or stroke in next six months. Over a seven year period, the mortality amongst those with high TMAO was twice as high as compared to those on vegetarian diet.

TMAO could increase heart health risk in multiple ways. It appears to cause platelets to become hyper responsive, and even a lower degree of stimulus can produce a more pronounced and more robust degree of platelet activation, clot formation which can lead to a blocked artery.

TMAO also appears to contribute to hardening of the arteries, enhancing the ability of cholesterol to form deposits and leading to plaque buildup in the blood vessels.

The Researchers noted that TMAO also appeared to outperform traditional blood marker of heart attack “ troponin”. Troponin -a protein released by damaged heart muscle cells, is considered the best biomarker for detecting a heart attack. About 31 percent of patients who tested high for TMAO but negative for troponin proceeded to have a heart-related crisis within 30 days and about 37 percent within six months.

New study does indicate potential benefits from limiting animal protein in your diet, even though some people are naturally inclined to high TMAO levels due to the makeup of their gut bacteria.