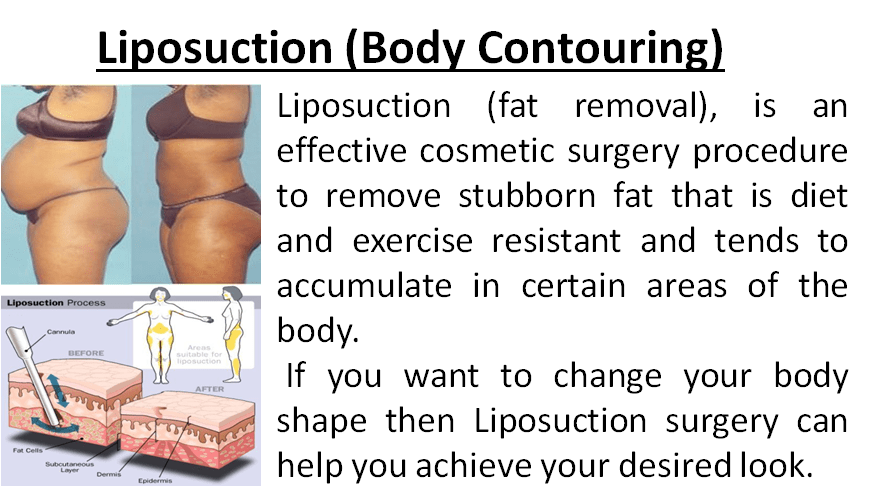 Liposuction is a surgical procedure that uses a suction technique to remove fat from specific areas of the body, such as the abdomen, hips, thighs, buttocks, arms or neck. Liposuction also shapes (contours) these areas. Other names for liposuction include lipoplasty and body contouring.
Liposuction isn't typically considered an overall weight-loss method or a weight-loss alternative. If you're overweight, you're likely to lose more weight through diet and exercise or through bariatric procedures — such as gastric bypass surgery — than you would with liposuction.
You might be a candidate for liposuction if you have too much body fat in specific spots but otherwise have a stable body weight.

Liposuction is used to remove fat from areas of the body that haven't responded to diet and exercise, such as the:
·         Abdomen
·         Arms
·         Buttocks
·         Calves and ankles
·         Chest and back
·         Hips and thighs
·         Neck
In addition, liposuction is sometimes used for breast reduction.
When you gain weight, fat cells increase in size and volume. Liposuction reduces the number of fat cells in a specific area. The amount of fat removed depends on the appearance of the area and the volume of fat. The resulting contour changes are generally permanent — as long as your weight remains stable.
After liposuction, skin molds to the new contours of the treated areas. If you have good skin tone and elasticity, your skin is likely to appear smooth. If your skin is thin with poor elasticity, however, skin in treated areas might appear loose.
Liposuction doesn't improve cellulite dimpling or other skin surface irregularities. Likewise, liposuction doesn't remove stretch marks.
Liposuction isn't recommended for people who have conditions that could complicate surgery, including:
·         Restricted blood flow
·         Coronary artery disease
·         Diabetes
·         A weak immune system

As with any major surgery, liposuction carries risks, such as bleeding and a reaction to anaesthesia. Possible complications specific to liposuction include:
·         Contour irregularities. Your skin might appear bumpy, wavy or withered due to uneven fat removal, poor skin elasticity and unusual healing. These changes might be permanent. Damage beneath the skin from the thin tube (cannula) that's used during liposuction might give the skin a permanent spotted appearance.
·         Fluid accumulation. Temporary pockets of fluid (seromas) can form under the skin. This fluid might need to be drained with a needle.
·         Numbness. You might feel temporary or permanent numbness in the affected area. Temporary nerve irritation also is possible.
·         Infection. Skin infections are rare but possible. A severe skin infection might be life-threatening.
·         Internal puncture. Rarely, a cannula that penetrates too deeply might puncture an internal organ. This might require emergency surgical repair.
·         Fat embolism. Pieces of loosened fat might break away and become trapped in a blood vessel and gather in the lungs or travel to the brain. A fat embolism is a medical emergency.
·         Kidney and heart problems. Shifts in fluid levels as fluids are being injected and suctioned out can cause potentially life-threatening kidney and heart problems.
The risk of complications increases if the surgeon is working on larger surfaces of your body or doing multiple procedures during the same operation. Talk to your surgeon about how these risks apply to you.

Before the procedure, discuss with your surgeon what to expect from the surgery. Review your medical history, list any medical conditions you have, and tell the surgeon about any medications, supplements or herbs you're taking.
Your surgeon will recommend that you stop taking certain medications, such as blood thinners or NSAIDs, at least two weeks prior to surgery.

If your procedure requires the removal of only a small amount of fat, the surgery might be done in an office setting. If a large amount of fat needs to be removed — or if you plan to have other procedures done at the same time — the surgery might take place in a hospital followed by an overnight stay. In either case, arrange for someone to drive you home after the procedure.

What you can expect

Before liposuction, the surgeon might mark circles and lines on the areas of your body to be treated. Photos also might be taken so that before and after images can be compared.
How your liposuction procedure is done depends on the specific technique that's used:
·         Tumescent liposuction. This is the most common type of liposuction. The surgeon injects a sterile solution — a mixture of salt water, which aids fat removal, a local anaesthetic (lidocaine) to relieve pain and a drug (epinephrine) that causes the blood vessels to constrict — into the area that's being treated. The fluid mixture causes the affected area to swell and stiffen.
The surgeon then makes small cuts into your skin and inserts a thin tube called a cannula under your skin. The cannula is connected to a vacuum that suctions fat and fluids from your body. Your body fluid might be replenished through an intravenous (IV) line.
·         Ultrasound-assisted liposuction (UAL). This type of liposuction is sometimes used in conjunction with tumescent liposuction. During UAL, the surgeon inserts a metal rod that emits ultrasonic energy under your skin. This ruptures the fat cell walls and liquefies the fat for easier removal.
·         Laser-assisted liposuction (LAL). This technique uses high-intensity laser light to liquefy fat for removal. During LAL, the surgeon inserts a laser fiber through a small incision and emulsifies fat deposits. The fat is then removed via a cannula.
·         Powered liposuction. This type of liposuction uses a cannula that moves in a rapid back-and-forth motion. This vibration allows the surgeon to pull out tough fat more easily. Powered liposuction might sometimes cause less pain and swelling and can allow the surgeon to remove fat with more precision, especially on smaller areas, such as the arms, knees or ankles.

Some liposuction procedures might require only local or regional anaesthesia — anaesthesia limited to a specific area of your body. Other procedures might require general anaesthesia, which induces a temporary state of unconsciousness. You might be given a sedative, typically through an IV injection, to help you remain calm and relaxed.
The surgical team will monitor your heart rate, blood pressure and blood oxygen level throughout the procedure. If you feel pain, tell your surgeon. The medication or motions might need adjustment.
The procedure might last up to several hours, depending on the extent of fat removal. After the procedure, the surgeon might leave your incisions open to promote fluid drainage.
If you've had general anaesthesia, you'll wake up in a recovery room. You'll typically spend at least a few hours in the hospital or clinic so that medical personnel can monitor your recovery. If you're in a hospital, you might stay overnight to make sure that you're not dehydrated or in shock from fluid loss.

Expect some pain, swelling and bruising after the procedure. You might need to wait a few days before returning to work and a few weeks before resuming your normal activities — including exercise.
Your surgeon might prescribe medication to help control pain and antibiotics to reduce the risk of infection. You also might need to wear tight compression garments, which help reduce swelling, for a few weeks. During this time, expect some contour irregularities as the remaining fat settles into position.

After liposuction, swelling typically subsides within a few weeks. By this time, the treated area should look less bulky. Within several months, expect the treated area to have a leaner appearance.
Liposuction results are generally long lasting if you maintain your weight. If you gain weight after liposuction, your fat distribution might change. For example, you might accumulate fat around your abdomen regardless of what areas were originally treated.