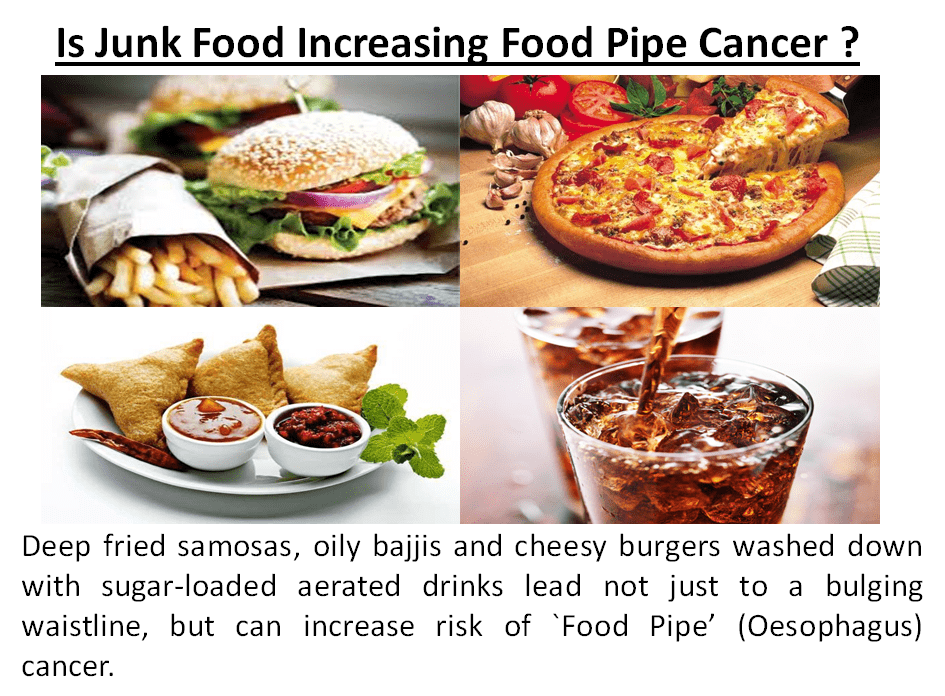 Over the past 20 years, many hospitals across India have recorded a two-fold increase in cancer of the lower part of the `Food Pipe’ (Oesophagus) caused by prolonged acid reflux disease linked to junk food.
"This kind of cancer, which is common in the West, is being seen more often in India. There appears to be a link between high-fat, low-fibre food and cancer as many people diagnosed with this type of cancer have been suffering from reflux," said Dr R Swaminathan, Professor and Head, Biostatistics and Cancer Registry, Chennai Cancer Institute.
In people with reflux, the acid which the stomach uses to digest food, escapes into the lower part of the food pipe. This constant backwash of acid can irritate the lining of the food pipe causing inflammation and scars leading to gastroesophageal reflux disease (GERD). The commonest symptom is heartburn or chest pain. In the last two decades, reflux has reached epidemic proportions.
Over a period of time, reflux can cause Adeno-carcinoma that develops in the bottommost part of the food pipe gland cells.
In the 90s, Gastroenterologists saw a rise in squamous cell cancer, mostly in the top and middle parts of the `Food Pipe’ (Oesophagus), which is mainly caused by smoking or chewing tobacco. Now, nearly a quarter of all Oesophageal cancers are at the bottom of the “Food Pipe’. In some hospitals, the number is even higher.
Senior gastroenterologists say dietary habits have played a huge role in pushing up cancer of the `Food Pipe’ (Oesophagus).
The Cancer Institute, Chennai, which maintains the Madras Metropolitan Tumour registry, has now decided to do a pilot study and register types and sites of  `Food Pipe’ (Oesophagus) cancer for the City Registry and National Registry.

Junk food, too trendy and fast growing in this generation, to live life healthy and fit, one should avoid these kind of food....