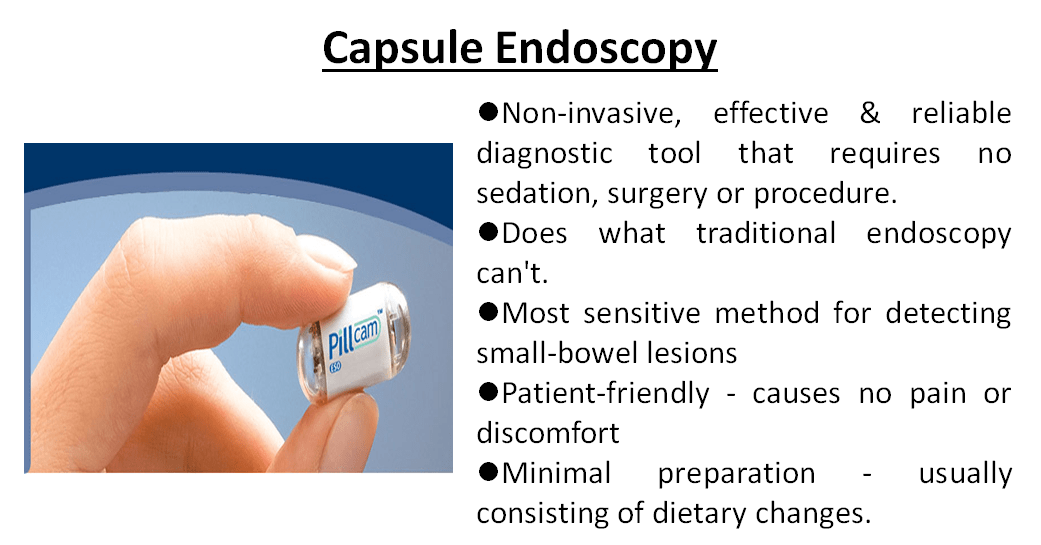 Capsule endoscopy is a procedure that uses a tiny wireless camera to take pictures of digestive tract. A capsule endoscopy camera sits inside a vitamin-size capsule that is swallowed. As the capsule travels through digestive tract, the camera takes thousands of pictures that are transmitted to a recorder worn on a belt around waist.
Capsule endoscopy helps doctors see inside small intestine — an area that isn't easily reached with more-traditional endoscopy procedures. Traditional endoscopy involves passing a long, flexible tube equipped with a video camera down the throat or through rectum.

Risks
•    Capsule endoscopy is a safe procedure that carries few risks. However, it's possible for a capsule to become lodged in the digestive tract rather than leaving body in a bowel movement within several days.
•    The risk, which is small, might be higher in people who have a condition — such as a tumor, Crohn's disease or previous surgery in the area — that causes a narrowing (stricture) in the digestive tract. In case of abdominal pain or are at risk of a narrowing of intestine, CT scan to look for a narrowing is done before using capsule endoscopy. Even if the imaging study is negative, there's still a small chance that the capsule could get stuck.
•    If the capsule hasn't passed in a bowel movement but isn't causing signs and symptoms, more time may be given to leave the body. However, a capsule causing signs and symptoms that indicate bowel obstruction must be removed, either by surgery or through a traditional endoscopy procedure, depending on where the capsule is stuck.

How to prepare
To prepare for capsule endoscopy, following is done:
•    Stop eating and drinking at least 12 hours before the procedure. This will ensure that the camera captures clear images of your digestive tract.
•    Stop or delay taking certain medications. To keep medication from interfering with the camera, certain medications may be stopped before the procedure. In other cases, doctor may advice to take medication two hours before or after swallowing the camera capsule.
•    Plan to take it easy for the day. In most cases, one can go about day’s work after swallowing the camera capsule. But likely be asked not to do strenuous exercise or heavy lifting.
•    In some cases, a laxative is given before capsule endoscopy to flush out small intestine. This has been shown to improve the quality of the pictures collected by the capsule's camera.

What can be expected
During capsule endoscopy
On the day of procedure, health care team reviews the procedure. Adhesive patches are attached to abdomen. Each patch contains an antenna with wires that connect to a recorder. Some devices don't require the patches.
Wear the recorder on a special belt around waist. The camera sends images to an antenna on abdomen, which feeds the data to the recorder. The recorder collects and stores the images.
Once the recorder is connected and ready, swallow the camera capsule with water. A slippery coating makes it easier to swallow. Once swallowed it is normally not felt.
Can do normal work but avoid strenuous activity, such as running and jumping.

After the Capsule Endoscopy
Wait two hours after swallowing the capsule to resume drinking clear liquids. After four hours, one can have a light lunch or a snack unless advised otherwise.
The procedure is complete after eight hours or when the camera capsule is seen in the toilet after a bowel movement, whichever comes first.
The patches and the recorder are removed from the body, packed in a bag and the equipment is returned. If the capsule is not seen in the toilet within two weeks, X-ray is done to see if the capsule is still in the body.

Results
The camera used in capsule endoscopy takes thousands of colour photos as it passes through the digestive tract. The images saved on the recorder are transferred to a computer with special software that strings the images together to create a video.
It might take a few days to a week or longer to receive the results of capsule endoscopy.