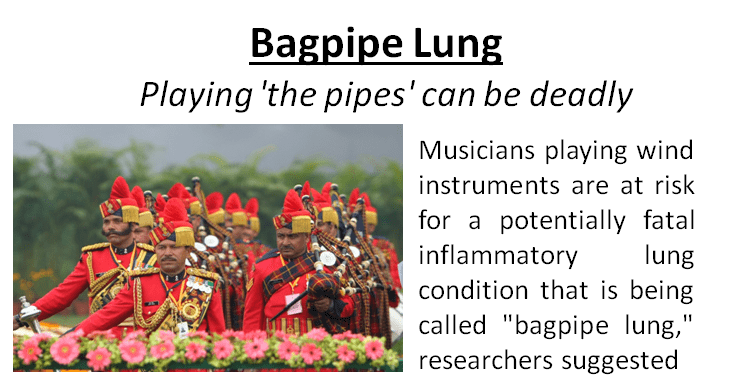 Writing in the journal Thorax, British researchers have described the case of a 61-year-old bagpipe player who died of interstitial lung disease - hypersensitivity pneumonitis (HP), which appeared to be caused by regularly breathing in mold and fungi thriving in the moist interior of his musical instruments.
HP is triggered by repeated exposure to airborne bacteria, fungi or molds found in the environment. More than 300 airborne substances have been shown to cause this disease.
Farmers, bird and poultry handlers, veterinary workers, and grain processors have all been previously identified as having an increased risk for the interstitial lung disease. There have also been isolated reports of musicians (including saxophone and trombone players) developing the disorder, which resolved when players began routinely cleaning their instruments.
This case is the first to link specific fungal contamination in a musical instrument to fatal HP.
"Clinicians need to be aware of this potential trigger for developing HP during history taking and clinical examination and the wind instrument players need to be aware of the importance of regularly cleaning their instruments to minimize this risk,"