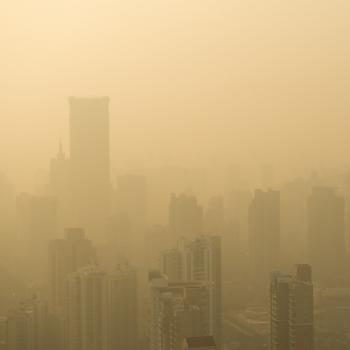 The risk of heart disease may be higher with greater exposure to air pollution, especially for people with diabetes. This is the conclusion of a new study published in the Journal of Clinical Endocrinology & Metabolism.

In the United States, heart disease is the leading cause of death for both men and women, killing around 610,000 Americans every year. Obesity, poor diet, lack of physical activity, high blood pressure, high cholesterol, and diabetes are among the numerous factors known to increase the risk of heart disease. Now, the new research from Dr. Novack and colleagues suggests air pollution could be added to the list.

For their study, the team analyzed the data of 73,117 adults living in southern Israel, where particulate matter (PM) - pollution that is made up of very small particles and liquid droplets - is high.
All participants were either smokers, or had been diagnosed with diabetes, ischemic heart disease, high blood pressure, or high low-density lipoprotein (LDL) cholesterol and/or triglyceride levels - known as dyslipidemia.
The researchers used satellite data on the amount of sunlight that was blocked by PM, alongside other weather data, to create a model that enabled them to estimate the daily air pollution each participant was exposed to, based on their address.

By analyzing more than 600,000 blood samples from the participants, the researchers found that exposure to higher average levels of PM in the previous 3 months was associated with an increase in heart disease risk factors. Specifically, they found that, compared with participants with lower PM exposure, those with higher PM exposure had greater increases in blood glucose levels, LDL cholesterol levels - known as "bad" cholesterol - and triglyceride levels. Triglycerides are a type of fat in the blood.
Furthermore, greater PM exposure was associated with lower levels of high-density lipoprotein (HDL) cholesterol, which is the "good" cholesterol.
Participants with diabetes fared worst with higher PM exposure, the researchers report, though those who were using non-insulin medications appeared to be protected, showing smaller changes in levels of blood sugar and cholesterol.
The team notes that exposure to air pollution did not have an immediate effect on blood samples; no changes in blood sugar, cholesterol, or triglyceride levels were identified in samples taken as early as 7 days from PM exposure.
It was cumulative exposure to PM over a 3-month period that was linked to increased risk factors for heart disease.
"While air pollution is linked with relatively small changes in cardiometabolic risk factors, the continuous nature of exposure and the number of people affected gives us cause for concern. Even small changes in glucose levels and glycemic control can contribute to increased risk of cardiovascular disease."